Mountaineering in Chile and Bolivia

Short version of our travel report Northern Chile/Bolivia 1996
(C) Hartmut Bielefeldt 1996
Unfortunately, the trip that we originally had planned was cancelled ten (!) days before departure (a German trekking agency with good reputation...). So we need to find a good alternative...
We quickly book a flight to Santiago de Chile, and there we'll see what one can do. The next step is the bus to the north, to Calama. The landscape on the way gives an intense impression of emptyness: Sometimes the smallest villages are hundred kilometers apart. With a rented car we visit the vast sceney and use the high altitude (3500-4500 m) of the land around the Salar (salt lake) de Atacama for acclimatization. We climb several 5000m peaks, among them (on the 3rd day since Calama) Cerro Sairecabur, with 5971 m the highest mountain of this range. Two and a half days ago, we had been on 2000 m, and without the security of the car for a possible retreat, such an altitude "acclimatization" certainly would not have been possible. 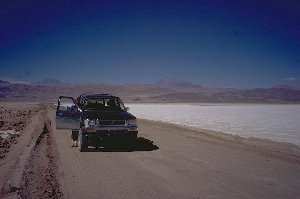 On the way to Socompa, 200 km of salt and desert

We had the ascent of Llullaillaco a bit farther south, 6739 m high, in mind as the highlight of this week, but without a permit the Carabineros at the station Socompa can not let us go there. We'd need their help to find the secure way to the mountain through the mined (!!) Chilean-Argentinean border area. Though these officers have to do their duties correctly (refusing us the access), they are very delighted about our visit and helpful and friendly like everybody in this country.
The road between Socompa and the Salar de Atacama touches not a single settlement over 200 km, and one hardly sees any plant beside the road. The only traffic constists of trucks transporting lithium and borax from the plants of the Litio Chileno Company in the center of the salar. This enterprise is said to be the world's biggest lithium producer.
Back at the Salar, we attempt to climb the active volcano Láscar. This fails due to "planning faults": The volcano has a height of 5675 m instead of the 5175 indicated in the map. If I had counted the contours carefully, I could have noticed that easily. So we reach only a secondary summit. 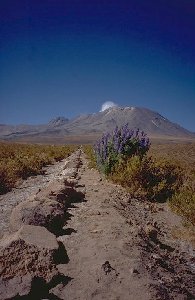 Flowers at a stone-covered water pipe near volcano Láscar, Atacama.

The next day is an excursion back to ancient times: Laguna Lejía, an icy cold lake (very salty, therefore not frozen) situated at 4200 m altitude behind Lascar. The scenery resembles our imagination of Earth some billion years ago: volcano cones releasing smoke in the background, no vegetation, and some unidentified old skeletons lying on the sand plains. What a cosy place! 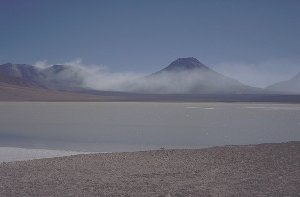 After the "inevitable" bath in the Baños de Puritama (a "must", very nice, but don't drive down without a 4x4 car) we give back the car in Calama. The higher mountains of Chile's very north attracts us now, since in May we had no chance at the really tall ones further south.
Arica, Chile's northernmost city, became Chilean in the Pacific War in 1880. In the treaty with Peru and Bolivia the construction of a railroad to La Paz was decided giving Bolivia a compensation for the lost land access to the Pacific sea. We'll use this railroad later. Beforehand we visit the city (1/2 day) and find out about the formalities for ascending the mountains in the border area to Bolivia (1 1/2 days). Generally, for the ascent of a mountain in frontier regions in Chile a permit (free of charge) is necessary which can be applied for at the government of the relevant province. In case of the volcano Parinacota, this is the province Parinacota with capital Putre. So we go there, and the capital turns out to be a quite rural village with 1200 people. The administration people help us as they can, and the permit application and answer goes by fax, but unfortunately the weekend happens to be in between. But that would be very similar in so-called "civilized" countries like Germany or the U.S., if not worse. We spend the waiting time climbing Cerro Taapaca, 5875 m, for which no permit is required. Funny: Near the summit, we see old ski descent tracks.
Monday morning, the permit fax really has arrived. The local carabineros refer us to the carabineros in Caquena, the village closest to the mountain.
For some hours, we try to get out of Putre by hitch-hiking, but that is not very successful in a village at the end of a dead-end street. In the end, we take a taxi (yes there is one) - not a cheap pleasure. However, the price is adequate to the value of the adventure, including hub caps suddenly passing the taxi.
In Caquena, the carabinero's first question is like "Caquena? What do you want here?" Understandable, since the usual traffic flow here is one car per week (and our taxi was now here and has filled the quota for the next days). Having seen the permit, he becomes considerably more friendly and invites us for a coffee, until his colleagues would come back from the patrol. We learn a lot about Chile and the Chilean point of view of the conditions in Latin America. For the night, we get a place in the school (school is obligatory in Chile), where the local teacher is hammering his Ph.D. thesis into a typewriter, lighted by a gas lamp. Also here we get many interesting informations about the country and its people. 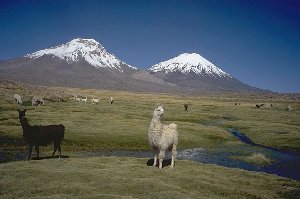 The walk towards the mountain is rather long and a bit annoying because of the dogs not giving up to follow us. A grazing Lama herd without any sympathy for dogs helps us getting rid of at least one of them. After leaving the swampy meadows around Caquena, we see some (at a height of 4700 m) unexpectedly magnificent trees, and beyond there the life becomes sandy. At 5005 m we find a campsite in black volcano sand. 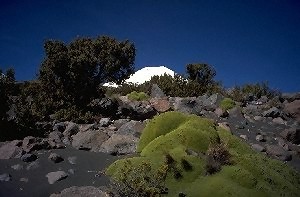 Trees and Llareta plants on the way to Parinacota, at 4700 m altitude 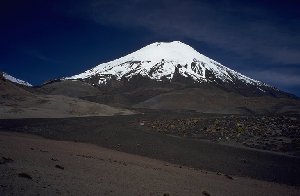 Parinacota in sight, now there's only sand in our way...

On the following day we tackle the mountain. We hardly get rid of our four-legged friend, but before entering the steep icy slopes we better fix him - despertately whining - at a rock (with enough food for the day). The slope up to the crater edge is endless like at all volcanoes - finally when one stands on top, one can say that it is (essentially) over. In case of Parinacota, the way from the crater edge to the summit takes about half an hour; the crater is worth seeing: a diameter of about 2 km with 300 m high almost vertical walls.
Having picked up our friend again, we spend another night at 5005 m and march to Caquena in 3 1/2 hours the following day.
Thanks to the help of the carabineros and the local teacher, we soon get a lift back to Putre. An ill lama must be brought to Putre, and on the pick-up truck there is some space for us.
Back to Arica, we take the train to Bolivia after a one-day break (the railroad was blocked). This is quite touristic (the first time we meet several foreigners at a time) but nevertheless very recommendable. 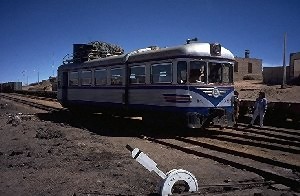 Train "station", somewhere in the nowhere of the Altiplano.

Very impressive is the arrival at La Paz late in the evening where the train follows a long curve around (and above) the city with a magnificient view on all the lights down the center. 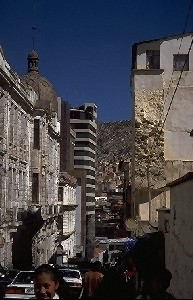 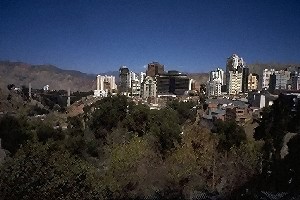 The next day we take a closer look at the world's highest capital (3000-4000 m): Compared to Chile, a highly chaotic traffic, and the streets go either up or down. Flat areas are rare, except for just the soccer stadium. Buying food becomes a huge time-consuming action, since one as to find article by article at the stands of the market women on the streets. The city's first supermarket has just been opened where we find at least five articles at a time.
Our next destination is Huayna Potosí. Provided good acclimatization at the height of La Paz (better a bit more), it is the "quickest" 6000m peak at all. On the first day, we get a ride to Lake Zongo (4700 m) and ascend to the camp on the glacier at 5400 m. On the second day follows the barely difficult, but beautiful climb of the summit (6088 m) with perfect weather and in the daytime very comfortable temperatures. The same day we go down to Lake Zongo and back to La Paz. 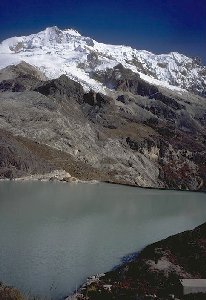 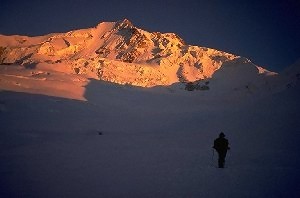 Early morning, leaving for the summit day at Huayna Potosí. 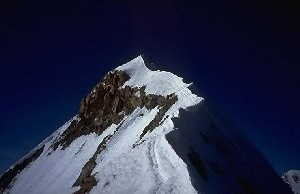 The summit ridge of Huayna Potosí is not difficult, but on the other hand clearly not boring. 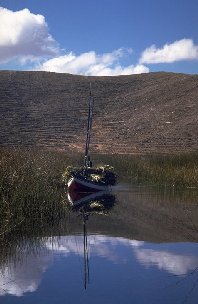 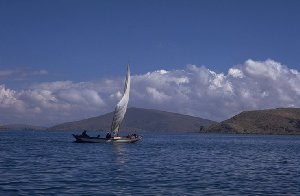 Now a culture day: The inevitable excursion to Lake Titikaka (3800m) (something one must have seen) with a visit of the reed boat island. Since we have the tour guide practically for our own, we gain a lot of insight to the "inofficial" side of Bolivia. For example, unlike in Chile here school is not obligatory, and the illiteracy rate is about 40%.

The next day, another mountain has to be our victim: From La Paz we get to the mountain that governs the city's view, Illimani. Forty kilometers as the crow flies give four hours driving time, saying enough about the local road network quality. From the last village we reach the first camp (4400 m) in four hours. The second day gives thousand meters of height difference to the camp "Nido de Cóndores" (condors' nest) on a rock pillar. For the way to the summit (6460 m) we have a quite mediocre weather, but we can't choose it. Despite the missing view, the summit is a good success, being not too simple from the technical point of view. 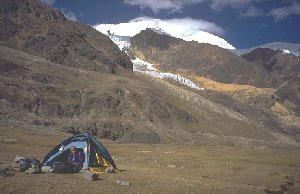 Illimani. The way up follows the long rock ridge at the right of the image center. 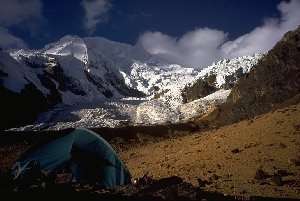 At the end of our rather short visit in Bolivia we have an excursion to the Yungas, the foothills bordering the Bolivian jungle regions. The road that leads us there is a mountain road of unprecedented quality: unpaved and mostly one-track, it is digged into a slope often 60 degrees steep to vertical, and the distance to the valley base is usually 500 to 1000 meters. Driving on the left side is obligatory here, the driver can better see how many millimeters of space he still has... 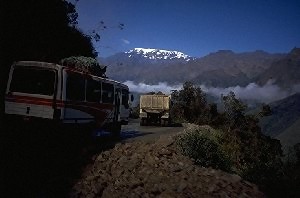 One of the wider spots of the road to Coroico

In Coroico, the first village in the tropical hills, we visit a "plantation" showing all what we had expected in the tropics: bananas, mangos, lemons, mandarin oranges (much better than those we buy at home), coffee, and also the famous coca plants. The latter are considerably smaller than we had imagined. 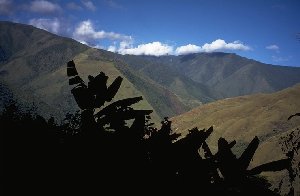 Banana plants and the hills of Coroico


After the again adventurous drive back to La Paz (our bus driver is a bit tired now, but fortunately we have the track at the mountain side now) we once again fail at the tremendous food portions of Bolivian restaurants. On the following day we fly back to Santiago de Chile and finally home to Germany. Remarks:
We have completely organized this trip on our own, as a two person team - even on a shorter term than our previous Chile trip (1994). This time we only had 8 days including booking the flight, because our originally planned trip suddenly was cancelled. With pleasure we can give you hints to carry out your individual trip. Possibly also the mountaineering links can be of use. © 1997 Hartmut Bielefeldt (english version)
Email:Hartmut Bielefeldt
Last updated: March 06, 1997 (text) / November 15, 1997 (images) by Hartmut Bielefeldt Last formal change on this page: January 28, 1998