Der flight to Dubai is one one of the last ones leaving Munich Airport in the evening. We soon could identify the third participant of the group, Klaus, a fit and kind Austrian. Six hours flight to Dubai, then another five hours to Nairobi where we arrive at noon - quite tired, because usually one doesn't sleep too well in the plane. Also our baggage is complete, and at the exit we are welcomed by a Kenian who introduces himself as Jimmy, our driver.

For five hours we travel through Kenia, first on a quite reasonable paved road with a tremendous amount of traffic, escpecially slow trucks. Later the road becomes more adventurous, and traffic becomes neglectable. The landscape changes: red soil, termites' nests, umbrella thorns (acacia tortilis), and in between the herdsmen with sheep or cattle. Zebras cross the road. That's how we had imagined Africa. 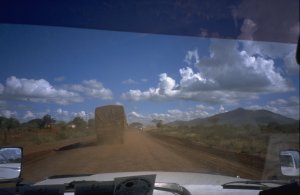 
As we arrive at our lodge in Loitokitok (spoken: Loytok-tok) it is raining heavily. But this is only a short tropical shower; later is becomes dry again.

Although yesterday was an exhausting day, we decide to have a safari day in Amboseli National Park. This turns out to be a good choice, even if Kilimanjaro is hiding in the clouds for the whole day. The number and variety of animals is breathtaking: zebras, marabus, impalas, giraffes, gnus, buffalos, Thomson gazelles, hyenas, elephants, ostriches, and vultures are grazing or sitting close to the road, unimpressed by the people in the cars watching them. Only the hippos and the lions keep such a large distance that one can recognize them only with binoculars, and also the warthog familiy quickly flees.

On the way back to the lodge in the evening we can finally have a glance of Kilimanjaro, the clouds are disappearing.

In the morning, our driver Jimmy takes care of the Kenian emigration formalities, since the lodge is already in no-man's land slightly behing the checkpoint. After that, we drive 45 minutes to the Tanzanian checkpoint and go on to Nalemoru Gate of Kilimanjaro National Park, at 1980 m. Here we meet our "escort": guide, assistant, cook, and five porters. Together with guide and assistant we slowly hike upwards. The sunny weather is quite warm, but after an hour a little rain sets in, and temperatures are comfortable. In between showers, again and again the sun comes back Until 2200 m we walk through maize and potato fields. Even in "pole,pole" marching speed1, the rain forest zone is crossed within an hour. Through srub we climb to Simba Camp at 2600 m. The whole walk took only 3 1/2 hours, and we could reach this time only because our guide Emanuel again and again calls for a rest. Escpecially on this low altitude that kind of speed might be excessively slow.

After a heavy shower around noon, we go for a short excursion 250 meters higher, but the summit doesn't come out of the clouds. On the way back we are caught by a heavy rain shower, so we quickly run back to the camp; the rest of the afternoon is some up and down of rain and sun.

Today, a long stretch of extreme pausing with Emanuel is waiting for us. After exactly one hour of walking time, he usually calls for a break.

The trail is good but rather even. The scrub becomes smaller and opens a bit. After the lunch break at the Second Cave, the trail crosses a plain. The third cave, where at 3900 m our campsite is situated, is under the edge of a small step which was created by an old lava flow. Probably all the caves at Kilimanjaro developed under such lava carpets.

The weather is very nice today, the whole day we are walking in the sun, and it is quite warm. With all the frequent and long breaks the way takes 7 hours - the walking time, however, was only 4 hours.

The French group (ascending parallel to us) encounters a problem this evening: The oldest member has left his wallet (including passport and flight ticket) at the point where they made the first break. He has no copies of the documents. The porters are running downwards in order to search, and after two hours they come back - with the wallet.

In the night there were two short rain showers, but in the morning we can see clouds only far outside, over the plains. Again a nice and sunny day. The morning is a little fresh, but during the day we can easily walk in shirts.

The trail leads through lava scree and flat depressions; vegetation becomes very sparse. At least the trail becomes a little steeper, and we see that we are gaining altitude when we look at Mawenzi and at the Kibo Saddle which opens beneath us.

After three hours we arrive at School Hut at 4700 m. No more vegetation, in shady corners one can find a little snow. There is no water in this region, our porters brought all water for today from the Third Cave.

After lunch we do an excursion to Kibo Hut - mainly in order to get some beverages for the long summit day tomorrow. Since the national park authority meanwhile has decided that nothing may be sold inside the park any more, we get nothing. So the "Coca Cola Route" (the normal way via Kibo hut) will soon loose its name.

Unlike the preceding nights which we had spent in the tent, we spend the few hours until our departure at midnight in School Hut.

Around half past midnight the three of us leave the hut, together with guide Emanuel and cook Arcard (the assistant had to take care of an other group in the valley, so the cook took his role at short term). It is a clear and not too cold night with a full moon; outside over the plains the clouds rise up to about 3000 meters. We can go without a lamp in the moonlight and enjoy the unique atmosphere of this night. Only the French and we are on the way on this route; the trail climbs up through scree fields towards the left.

After two hours we meet the main route, and loneliness and contemplation are over. A mass migration is moving up the endless zig-zags up to Gillman's point. We proceed well and reach Gillman's Point (5681 m) at five in the morning. From here to the main summit, one has to traverse more or less along the crater rim, but also here the trail is easy. Meanwhile we all feel quite cold; it is only -11°C, but the wind, the altitude, tiredness and bad acclimatization amplify the feeling of cold.

Finally, at half past six the sun is rising, making the cold more tolerable. At quarter to seven we are on Uhuru Peak, where the famous sign is standing. We don't stay very long, because except for Mount Meru the view to the landscape is hidden by the cloud layer below us. So just a couple of photos of the summit and the sign. On the way back to Gillman's Point, we can enjoy the view of the unique terrace glaciers of Kilimanjaro.

The scree is done a lot faster downwards than upwards - before nine o'clock we are at Kibo Hut and relax some time after a long night. It is sunny, and on the terrace it too hot to really find some sleep.

On the further descent, the clouds are waiting for us on the Kibo Saddle, but until Horombo there is only a slight rain. After two hours we are sitting in the tent at Horombo Huts (3730 m), in mist and sometimes heavy rainfall.

The morning is dry and even a little sunny, so we can have a look at the senecias in the area - strange plants, up to five meters high. 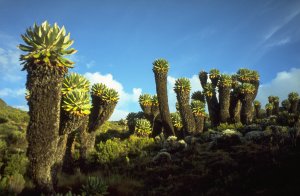 Today we go down to the gate, a descent of 2000 meters. The first part leads through a forlorn landscape which was devastated by a forest fire - caused by cigarettes thrown away - over many kilometers. Only some lobelias are standing in burnt scrub.

As already the way yesterday, also today we have to walk quite a distance because the route doesn't lead down directly but traverses the slopes for a long time, often without any noticeable drop. Further down the vegetation becomes dense, Mandara Huts (2700 m) are already situated in rain forest. But there are still eight kilometers to Marangu Gate. Shortly before the gate we meet some monkey jumping around in the trees. After 4 1/2 hours we leave the national park at the gate, we get our "summit certificates" and say good-bye to the team who did a very good job in supporting us at Kilimanjaro. Of course not without leaving some equipment and an appropriate tip with them.

Jimmy is already here and brings us, now through falling rain, to Aishi Machame Hotel. First we were a little astonished that we didn't go to a hotel in Moshi and later turned onto a small road to Machame. But the hotel that turns up here "in the nowhere" is perfect, we could only have dreamed of such comfort during the last days on the mountain: swimming pool and one or another beer. The latter one is named "Kilimanjaro" and has the nice slogan "It's Kili time - time to kick back, relax and take it easy with your friends.". That's what we will do now, so we relax at the pool after the first basic cleaning under the shower is done.

The afternoon is sunny again, but Kili stays in the clouds.

It is cloudy today. Maybe that is not so bad for the long drive to Nairobi, it wouldn't be so hot in the car. After lunch in Arusha where abundant vegetation is growing, we drive through scarcely populated grassland to the Tanzanian/Kenian border for 1 1/2 hours. Also in Kenia the landscape changes only very slowly, along the road we see some Maasai herdsmen with goat herds. But a very strange phenomen are the donkeys which seem to prefer the grass that grows directly at the edge of the road pavement. Mostly they are standing with their back towards the middle of the road, and they are not at all impressed by approaching cars. Instead, they might very slowly cross the road in order to - maybe - find even better grass on the other edge of the road. Thanks to Jimmy's farsighted driving, there are no real confrontations.

We have diner in the "Carnivore" restaurant in Nairobi. As the name indicates, one gets many different kinds of meat here as long as one wishes - only when we put aside the little flag on the table, the supplies are stopped. Under the more exotic animals we find zebra (which is quite tough), antilope and crocodile.

After diner we go directly to the airport for the long flight back home, where we arrive at Sunday afternoon - back in a cold and wet German winter. This was a rather short vacation, but we got to know a unique landscape and wonderful people.

This page is confirmed to comply with the HTML 4.0 standard.
Last updated 24 April 2004 by Hartmut Bielefeldt